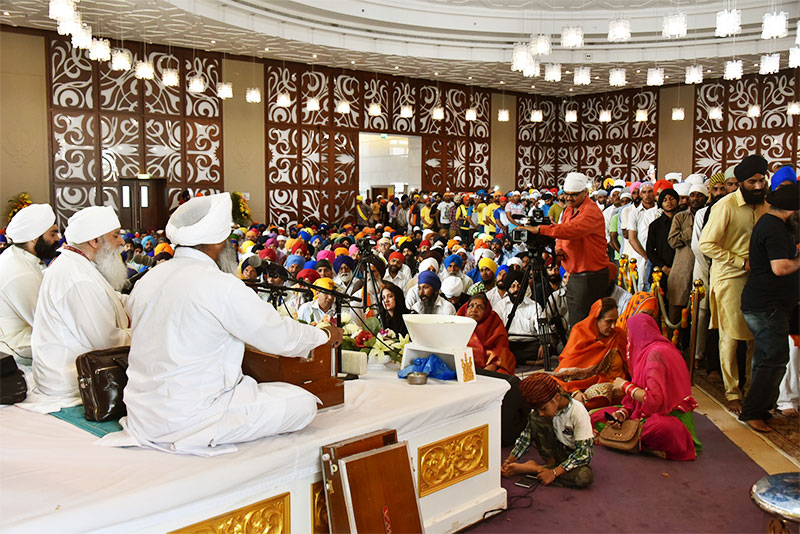 The Gurdwara GuruNanak Darbar Sikh Temple in Jebel Ali, the only Sikh temple in the country, hosted the grand celebrations of Baisakhi on Friday 15th April 2016. As many as 100 buses and umpteen number of cars brought in Sikh devotees from across the emirates to the venue.

Over 65,000 devotees attended the celebrations. On Friday, the prayers and celebrations started from 4.30am and continued till 9pm. HE Mr. TP Seetharam, Indian Ambassador, Abu Dhabi UAE was the Guest of honour at the celebrations who was also accompanied by his wife Mrs. Deepa Seetharam.

The highest honour of the Temple, the Golden Sword and Siripao was presented to H.E. by Mr. Surender Singh Kandhari and Bhai Chamanjit Singh Lal. The Sikh community in the UAE is thankful to His Highness Shaikh Mohammed bin Rashid Al Maktoum, Vice-President and Prime Minister of the UAE and Ruler of Dubai for generously donating this land for the temple and allowing us to build it here.”

The temple attracts thousands of visitors from across the world every year. Gurudwara is the most photographed one and stands second after the Golden Temple in Amritsar when ranked among all Gurudwaras in the world. We are also proud to announce the GuruNanak Darbar Gurudwara Dubai
The Only Gurudwara that has achieved the World’s most number of Management Certifications(ISO9001, ISO14001, OHSAS 18001 and ISO 22000) issued by International Organization for Standardisation (ISO).